Whatever you think of Donald Trump – and he certainly provokes strong opinions – he has his own style, and breaks plenty of rules. As a public speaking coach, I find watching him strangely compelling – in small doses! Here are 5 public speaking skills I believe Trump gets right when he’s speaking to audiences: 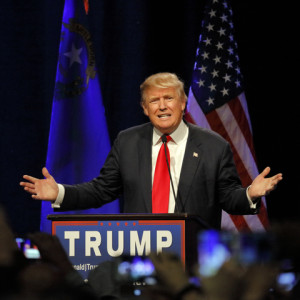 1. He has strong, open body language. When you watch Trump speaking, he is usually behind a lectern; but although this can be a barrier between speaker and audience, he compensates as much as possible with open palm gestures and real ‘alpha male’ body language. Trump takes up the maximum amount of space available to him.

His content and his body language are also congruent; we have two communication channels: our words, and our body language. When we see a speaker who is incongruent – the two channels don’t match – we’re wired to believe the body language. Trump is completely congruent with both. His self-belief is so strong that this was never going to be an issue for him!

2. He has strong vocal presence. He breathes well, and has enough breath to carry his sentences right through: no fading out at the ends of his thoughts for Donald! Breath is vocal fuel, and he uses it. His voice is strong and projects well; he emphasises key words; and he avoids monotony by chopping up a lot of his thoughts into fragments which are delivered with a variety of pace and pitch.

3. He gets our attention.  Our brains are wired to pay attention to novelty: we’re never quite sure what Trump will say next. And his speaking style frequently appears to be a series of randomly plucked thoughts and riffs. This makes him seem spontaneous and unscripted…which also makes him appear authentic (spontaneity is one of the main factors in authenticity). Politicians nowadays are scripted right down to each specific word: media training and the directive to stay permanently on message means that any novelty or spontaneity has been sucked out of their words. So this is incredibly refreshing for his targeted audience.

And to take this idea a step further: if you think about Trump’s targeted audiences, they would also be unscripted and unstructured if they had to speak to a group! So they can relate to him.

4. He uses simple language. In March, a Carnegie Mellon University study confirmed that Donald Trump uses the simplest language of the presidential candidates and Democrat Bernie Sanders the most complex. This was highlighted in the media, often in derogatory terms. But again, the goal of a politician is to get his messages across clearly and to relate to his target audiences. Trump knows that he needs to cut through complexity; he would also be very aware that some people in his audiences would  not speak English as their first language. So even as he negatively targets Mexicans with his words, for example, he’s actually aiming to make his ideas clear to them!

5. He uses few or no notes. Trump’s sparse use of notes makes him again seem more spontaneous and ‘real’. It also allows him to have more eye contact with his audience, which in Western societies is seen as a major positive. Leaders who deliver strong eye contact are seen as more trustworthy.

So whatever you think of Donald Trump – megalomaniac, narcissist, clever, manipulative – you’d have to agree that he certainly captures our attention.

How Mastering Discomfort Can Set You Free to Speak in Public

Mastering discomfort can set you free Speaking in public is confronting for... read more

How to Overcome Public Speaking Fear

Use a simple speech structure Have you ever been asked to present... read more

7 Ways NOT to Open your Presentation

The opening of your talk is crucial: your main goal is... read more