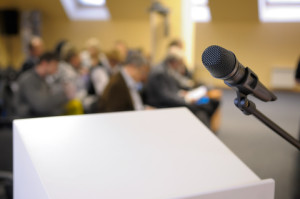 Should you move around when presenting?

As presenters, people tend to fall into two opposing ‘choreography’ camps when they’re in front of a group – you may recognise yourself here:

Advantage: you feel better because you’re in a safe space (or safer – of course it’s all relative!)

Disadvantage: it’s a boring, un-engaging look for your audience, and using so little physical energy  is unhelpful for you too – if you’re nervous, that adrenalin and cortisol will ‘bank up’ in your system and perpetuate any physical symptoms of nervousness. Plus you won’t be able to access enough of the energy you need to get your message across effectively

2.You do the opposite and roam the floor:  like a speaking nomad looking for a place to set up camp for the night.

Advantage: you’re burning off nervous energy, so you feel a bit better than if you were standing still

Disadvantage: it’s distracting after a while,  and usually arouses low-level anxiety in the audience with your constant moving about

Do you recognize either of these two styles in yourself (or others)?

As you work on your speaking skills and get the fundamentals in place, like overcoming nerves and creating a solid core message and sticking to it, you can begin to work  physical placement into your preparation. You deliberately work out where you’re going to stand, when to move upstage, or away from the lectern – and there’s a solid reason behind it…and then you practise the movements enough to make them look spontaneous.

Please note that I am not talking about rehearsing hammy, over-the-top gestures that look like you’re auditioning for a histrionic T.V. soap! Of course that’s just going to look stage-managed and fake. What’s important is to start learning about owning the space you’re speaking in, and using that space in the most effective ways to get your message across.

Then you need to physically practise those moves until they come naturally.

To sum up: physically owning your speaking space is another important key for good presentations, and a great way to create high audience engagement.

If you enjoyed this article, please share it on social media by using the buttons below – thanks!

Two Brain ‘Fuels’ You Need When Speaking in Public

Have you ever thought about what brain 'fuels' you need when... read more

plotting your imaginary graph Using your peripheral vision - opening out your... read more

The Essential Speaking Skill of Clarity

How to change your negative beliefs about speaking: 5 step plan

Choosing new beliefs I sometimes work with clients who have seen themselves... read more