Where’s your locus of control around public speaking?

Control: where do you sit with that word when you think about public speaking? My clients often struggle with feeling out of control in different ways when they’re presenting – either mentally, physically or both. When your sense of control goes, so does your confidence. Loss of control = loss of power, and powerlessness = stress. Your brain actually loses prefrontal function when you feel out of control (that’s the higher thinking part). But so long as you have the perception of some control, you get to keep your cognitive functions: in other words, you’ll still be able to think clearly while presenting to a group! 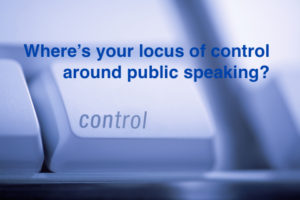 Where’s Your Locus of Control Around Public Speaking?

Speaking to groups is a situation with many variables, which will inevitably trigger control and uncertainty challenges. (Generalised anxiety too isn’t only a signal that something needs attention in your life – it’s also a drive to eliminate uncertainty and a sense of loss of control.)

Why does control matter? It’s one of the human drives that motivates us. Our brains love feeling in control – and really dislike the feelings of uncertainty and stress that come with losing it (unless we’ve chosen that loss of control by, for example, watching a horror movie or going on a rollercoaster!). When we over-do control – and especially if we’re used to having a large amount of control over daily events – we can get used to this idea: “If I don’t like something, I can get rid of it”. But with public speaking anxiety – or any anxiety – if you just try and get rid of it, it’s actually going to increase…and you’ll feel chaotic and awful. Suppressing, trying to ignore anxiety: it’s going to rear up more strongly until you attend to it.

Another issue around control and public speaking is the urge for a guarantee: “I must know that I’ll be ok….that nothing will go wrong”. This is a massive energy drain: trying to control events so as they go as you hope or imagine, lessens your ability to bounce back when things do go differently, and exhausts you.

Control and resilience. Talking of bouncing back: control is also part of a resilient mindset. Resilience is talked about a lot nowadays: if you feel like you don’t have much control over your life, you’ll get more stressed by difficulties.  Dr. Suzanne Kobasa, a psychologist at the City University of New York has worked with 1000’s of professionals, and has found three critical factors in resilient people in the workplace:

1. Control – feeling a sense of control in their lives
2. Commitment – a commitment to their work or task
3. Challenge – seeing tasks as a challenge rather than a threat

So control is a fundamental principle of the brain – and there’s also an aspect of control which we learn as we grow up, called locus of control. If you’ve never thought much about what your triggers and drives are, this is well worth taking a moment to consider, and I’ll explain why.

Locus of control. Locus just means place. Let me explain it by first asking you a question: do you think your success depends on what you do or what the outside world does to you? As your daily life shifts from one event to another, do you believe that success or failure in any event comes down to things you have control over, or forces outside your control? Your answers will depend on your overall locus of control – whether it’s internal or external. Whichever orientation you work from influences the course of your life.

So where are you on this spectrum? And is this an easy question for you to answer?

An external locus of control means that you tend to be tossed around by forces outside yourself – circumstances, fate, and what other people think of you: or what you imagine they’re thinking. This creates a loss of control for you. You may also think that it’s not worth setting goals because too many things can derail  them that are outside your control. On the positive side, externals are often more easy-going than internals, and more able to tolerate situations which they don’t like for longer.

Internal locus of control means that you believe you create your own success or failure: that your outcomes result from your own behaviours. You’re more likely to believe that if you set a goal and work hard, you can achieve it. It’s about your beliefs and perceptions: not actual reality. If internals take it too far they can push themselves into extreme stress levels, anxiety and even depression.

Internal locus is the most helpful, and most motivating when you’re trying to improve your public speaking skills.

As humans, we’re usually somewhere between these two ends of the spectrum: and we can also vary from one situation to another. You may feel a great sense of control in your overall work, but get buffeted around by your family and lose that internal locus. Or feel control in every aspect of your work but public speaking.

It’s a commonly used tool in sports psychology, where the goal is to focus on what you can control (e.g. attitude, endeavour, skills training) rather than what you can’t (who you’re competing against, the weather, umpiring decisions).As you’re reading this article, I’d think that you have a sense of internal control to some extent, or you wouldn’t even be trying to improve your public speaking skills.

If you have more of an external focus, where it’s more about what the world thinks of you, you’ll find it harder to overcome speaking anxiety. (And as side issues: if your self-worth is tied up in what others think of you, you’d know what a tough way to live that is; so many people too, have trouble separating their worth from their work. Both of these factors will also hold you back from improving your skills.)

So where’s your locus of control around your public speaking? If you recognise yourself as being more external than internal, the general consensus in the research shows that it’s movable, and helpful to you to move more towards internal control as you work on new skills. And it’s worth remembering that the only thing we can control is ourselves, not other people!

Locus of control is a commonly used tool in sports psychology, where the goal is to focus on what you can control (e.g. attitude, endeavour, skills training) rather than what you can’t (who you’re competing against, the weather, umpiring decisions).

Solutions. If you know you’re uncomfortable (or driven mad) by your need to feel in control, here are some things  you can do to help yourself:

Step one: recognise that yes, certain elements of public speaking are outside your control

Step two: having recognised this, can you now loosen your grip at all on the need for your talk to have a certain outcome? Or loosen your attachment to the idea that your public speaking should/must be a certain way…polished? Seamless? Flawless? Not a single ‘um’ or fumble? Even if you can’t loosen your grip, don’t panic! Keep going onto the next steps

Step three: what small elements can you control? Firstly, here are examples of goals which you can’t control:
1 Wanting everyone in the audience to like you/like your message
2 Picturing everyone smiling at you
3 Getting the whole audience to take a specific action after your presentation
4 Your whole talk going smoothly and seamlessly, with not a single rough moment

And here are some things you can control:
1 Practise the opening and close of your talk – out loud too – until you really know it, it’s embedded in your mind. Obviously, practising the whole talk is ideal: but if you can’t do that or don’t have the time, then the opening – when you’re usually the most nervous and the audience is looking at you – is very helpful

2 Venue: if you’re going to a new venue, try and get into the room beforehand so that you can start to acclimatise your system to that space, and make it more ‘your’ territory. I had a client this week who was presenting to the board of directors, and she chose to go into the room briefly on a pretext while they were having lunch, so that she wouldn’t be walking in ‘cold’ for her presentation. And when I gave a keynote last weekend, I got there early to do the soundcheck and settle my body in the big room. I walked around the stage and told myself “This is my space”

3 Breathe and anchor yourself in what’s actually happening right now. Anxiety is worry about the future….and we can’t control the future, much as we might like to try. There’s a theory that one reason why successful entrepreneurs have done so well is because of their ability to tolerate uncertainty

4 Your self-talk. This takes practice. Recognise where you’re talking negatively to yourself, or in absolutes: “I always….I never”…I can’t…I have no choice” Then come up with a new, short positive statement such as: “I do have some choice here.” or “Focus on what you can control” or “I can handle this”

To sum up:
Loss of control in public speaking and life is inevitable…and trying to control everything doesn’t work, and uses masses of energy and resources which you can’t afford to use. So, you have to let go of what you can’t control, focus on what you can. When you do this, you’ll have that internal locus you need. Then you’ll be able to walk to the front of the room knowing you can only do the best you can, in the timeframe you’ve been given.

How to Practise Your Presentation: Practical Tips (And What Not To Do)

Group of Practice Golf Balls - vorakorn There are many different ways... read more

Overcoming Fear of Public Speaking: Playing at the Edges of your Comfort Zone

Two Brain ‘Fuels’ You Need When Speaking in Public

Have you ever thought about what brain 'fuels' you need when... read more

Which Music Can Make you Feel More Powerful Before you Present?

In this video, I discuss balancing certainty with curiosity as a... read more